Follow me on Spotify and listen to my Christmas Playlist!

4. Fairytale of New York - The Pogues with Kristy MacColl

7. The Season's Upon Us - Dropkick Murphys


8. I Want A Hippopotamus For Christmas - Lake Street Dive

10. All I Want For Christmas

A bunch of stuff distracted me the challenge, a trip or two, a funeral or two, my dad's illness, the internet, and a whole lot of feeling about all of it. I'm going to try it again though. I think I'll make my own this time. I wonder if I'm more likely to stick to it if it's my own creation. I guess we'll see!

Let's see... a few good things since my last post.


So there's my update. We're heading to NY for the holidays so I'll probably post tons of pictures of snow. I'm working on the assumption that we WILL get snow because I miss snow.
at December 16, 2018 1 comment: 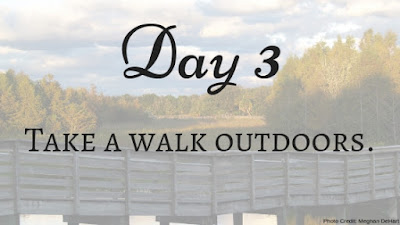 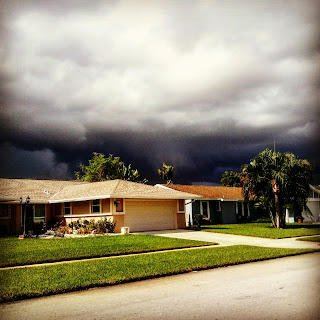 I'm already enjoying this challenge.
I think I'm going to make my own challenge. But I think I'd like one that builds on itself. So on Day 1 you do the one thing, then on day 2 you do the thing from day one and the new thing from day 2... and so on. Hmmm... now to decide how I want to challenge myself.
Ideas?

Ten Things For Which I Am Grateful. Mental Wellness Challenge Days 1 & 2.

The list goes on. You might notice a pattern here. All the challenges I mentioned are related to physical health and fitness. That's great but what about your mental health?

That's an excellent question. Thank you for asking.

I recently came across this twenty day mental wellness challenge on facebook and thought "What the hell? It couldn't hurt right?". So I rounded up a bunch of internet strangerfriends and made us a mental wellness event.

Here is the challenge: 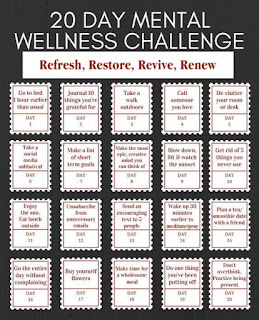 I've had to adjust a few of the challenges, like the day you're supposed to pray. As a devout atheist this goes against all of my beliefs. But overall I'm going to try and stick to it. We're only on Day 2 but lots of people who joined the event are participating today and posting their lists.


Ten Things For Which I Am Grateful

My Day 1 of the challenge was only a half success. The challenge was to go to bed 1 hour later. I failed. But I had slept in that morning and got about an extra hour of sleep so I'm calling it a success.

*I do not know where this challenge originated. If anyone knows please let me know so I can give that person credit. 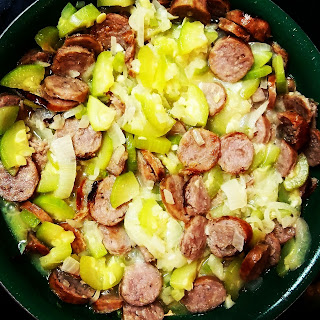 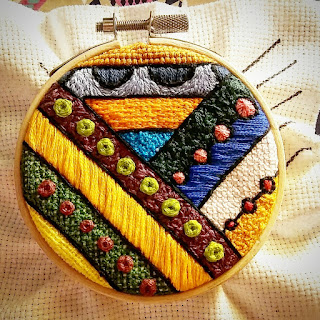 I've been cross-stitching for years and I just started learning other forms of embroidery. I've been drawing these abstract pattern doodles for quite awhile but it somehow never occurred to me to combine my hobbies until recently. So I tried it! This is what I came up with. I'm quite happy with it for my very first embroidery project.

I find that when I hit a (hypo)manic phase I'm far more creative than when I'm "normal" and obviously far more than when I hit a depression phase. I find that I genuinely enjoy the creativity that my hypomania brings but there are so many challenges that go with it. I have a tendency to overspend when I go hypomanic and curbing my urge to spend money on things I don't need is difficult. Thankfully I've gotten better at recognizing the signs of mania before my spending gets out of control. This time I only bought a few inexpensive craft supplies a few days in a row before I realized that I was in danger of getting out of control. I started bringing just one credit/debit card with me to work or to run errands and I started making sure I didn't start running errands without first making a  list of what I needed. Most importantly I told my husband to watch me. To pay attention to the money that I'm spending. Because while I know that ultimately I am responsible for my behavior I also know that I truly have a partner in my husband and that I can depend on him to help me when I need it. This is a first for me. We've been together eight years now but it still amazes me when I think about how lucky I am (even when he is driving me insane).

Another challenge is sleeping. Suddenly I need far less sleep than usual. I am normally a 10 hour a day sleeper (whenever possible) but suddenly I only need 3-4 hours. I know it's not healthy but if I try to force it I just stare at the ceiling. Unfortunately I've been filling those hours with facebook and crafts instead of grown up things like cleaning and meal prep and writing one of the three fucking books in my head. I find that concentrating definitely gets harder, which is really frustrating. I haven't found a fix for that yet so get ready for a month or so of random updates with no pattern and expect them to come all at once or not at all.

Here's another recently completed cross-stitch. This one was a gift for a coworker who was moving out of state. 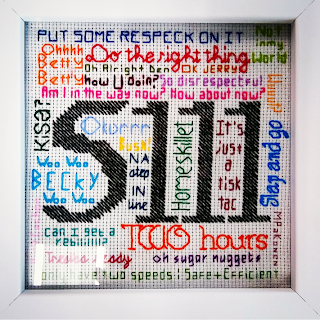 And here's an old picture of me just for the hell of it.
I scanned a few old pictures last time I was home to visit. 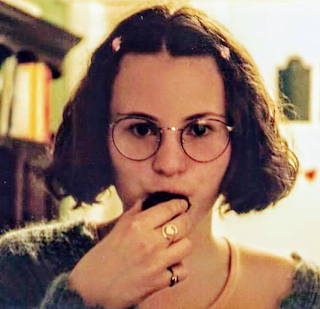