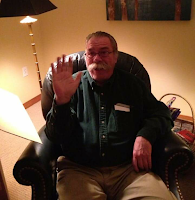 My dad wasn't a teach you to rollerblade, toss a ball, get lost in the woods for fun kind of dad. He didn't teach me how to use power tools or change a tire on my car. He wasn't the disciplinarian in the family and he certainly never put the fear of god into any of my boyfriends. (My mother was far better suited for that). He didn't coach my little league team (although to be fair I threw the tantrum to end all tantrums when it came time for little league sign up. Neither parent ever tried organized sports again.).

Now you might think that all those traditional dad things are what makes a good dad. I can assure you that you would be wrong.

When I was younger I just thought of my dad as Daddy, the cool, pot smoking, smart, messy, old dude that didn't really like people except for a very small group.

As an adult I can look back and see some amazing things. When I was 12 or 13 I said I didn't want to go to the circus anymore because of animal cruelty. So my dad found Cirque Du Soleil and took me so that I could still enjoy all the good stuff and none of the cruelty. He was always finding offbeat stuff to take me to. As it turns out he was way ahead of the game. He found Cirque before it was cool, we saw Blue Man Group when they were still ONLY in the Astor Place theater, we saw Capitol Steps back in the Clinton/Lewinsky days. He would scan the back of the Village Voice to find cool stuff for me to do. He told me about TMBG dial a song long before I actually knew who TMBG was.

He took me to the children's museum and the county fair and the meadowfair and south beach rides and the beach and the park and the arcade and the ice skating rink. He spent unimaginable amounts of money letting me try to win a $2 stuffed something or other at the shoot the water into the clowns mouth game. He went on the tilt a whirl with me 7 times in a row because it was my favorite ride, even though he didn't really like rides. Hours of skee-ball and claw games, ring toss and get the ping pong ball in the fishbowl to win a fish that will definitely die in less than three days. Endless clouds of cotton candy, caramel apples until I was sick of them. He watched me skate around and around and around for hours even though I'm sure there were sports to be watched or naps to be taken.

My dad was at every performance I remember being in, with flowers and congratulations. Every graduation, every awards ceremony, beaming with pride even though he'd just had to sit through 75 other little kids that have no rhythm, or acting abilities.

My dad gave me an unending supply of books. Even that time in fifth grade that I insisted that I wanted to read the unabridged version of Oliver Twist despite the bookstore lady warning that I likely wouldn't understand it. He didn't think for a minute that I would have trouble with it. He always had boundless confidence in my intelligence. He introduced me to Kurt Vonnegut and Hubert Selby Jr and Jack Kerouac. He let me wander around bookstores and libraries for what seemed like hours (and actually might have been), and carried home all my new books while I started reading. He asked questions about the books I read even though I am absolutely sure that he did not care what Kristy, Mary Anne, Dawn, Claudia, Stacey, Mallory and Jessie were up to.

He gave me someone I could always turn to when I needed to talk. In my teenage years he gave me a safe place to rage against my mother; he validated my rage without ever talking badly about my mother. Which, for a divorced couple, even a friendly one, is goddamn amazing. He let me talk to him about literally anything and always answered my questions honestly, even if the answer was occasionally "I'm not telling you that". He let me talk. This may not seem like much but if you've ever caught me after a few cups of coffee on a high energy day when I had a lot on my mind, you would understand why that is so impressive. I can literally talk for HOURS if no one stops me. Just ask my mother about the ride to from New York to Virginia when I was 5. To this day he listens to my half baked ideas and encourages me to go for it, even though he has absolutely no idea what I'm talking about when I start telling him about an app I want to build.

He has read everything I've ever written and let him to read and told me what an amazing writer I am. He saved every silly construction paper father's day project I ever made in school and made a big deal about how talented I was. He looks at my photographs and artwork and crafts and sees things that even I didn't see when I was creating them. He made me believe, and still makes me believe, that I really am talented, even when imposter syndrome is hitting me hard.

He gave me music. From classic rock to alternative to folk, bluegrass, and hardcore. He bought me my first Green day album, introduced me to Nirvana, played me Tom Waits for the first time. Because of him I know who Lou Reed is, Leona Naess and Nick Cave, Elvis Costello and Warren Zevon, Loudon Wainwright and Temple of the Dog, Mad Season, Jane's Addiction, Bill Monroe, Rancid, Bryan Ferry, Poco and Pure Prairie League. He introduced me to WSOU and K-rock. From him I learned an appreciation of music from a wide variety of genres.

Now that he is facing an uncertain future I am more grateful than ever for having had him as I grew up. I consider myself very lucky to have had a nontraditional dad, although he does tell some fantastically punny dad jokes.